Instead of the origin story of a superhero, we get that of a supervillain, the eponymous Joker.

There has been a lot of controversy about this movie, which is basically about the rise of a crazed serial killer; those who oppose it say that this is another example of glorified violence. Personally, I think the movie made the Joker and his life look damn unattractive, but that’s just my opinion. I did think it was brilliant and that Joaquin Phoenix (who is a favorite actor Chez Otter) deserves a damn Oscar for this. He was that good.

And now I’m going to venture into SPOILERLAND, so if you don’t want to find out anything about what happens, stop here.

So wow. I had tried to see this for a month, even attempting to get to a movie theater while on vacation, and it just didn’t work out…then I suddenly found myself with an afternoon free (anomalous for me) and just went ahead and did it…and I’m so glad I did.

This is the slow descent into madness of a serial killer, and Phoenix brings out every nuance of crazy. He is believeable, sociopathic, and scary as hell. I can see why it got huge acclaim at the Venice and Cannes festivals; it’s not about capes or superpowers, it’s just about this one guy and watching him live his life.

The one thing that I found odd was his last interaction with the woman and child he’s fixated on…did he kill them? He just left their apartment, but nothing was shown…I found out later that all his interactions with her were imaginary, from meeting in the elevator onwards; this makes more sense than that she (especially being the mother of a young child) would have ANYTHING to do with him, but I somehow missed that that was going on.

Otherwise (and that was probably my mistake, not the writers’) it was well written, amazingly acted, and dark as hell.

If your taste runs to this sort of dark psychological drama thing, make sure you see it. If it doesn’t, here’s a nice kitty you can look at instead: 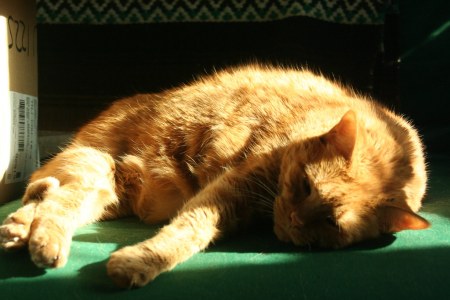 This entry was posted on Friday, November 15th, 2019 at 12:13 pm and is filed under $$$$$ $$$$, characters: excellent, explodo: average, f/x: good, ottersmile, watched in theater. You can follow any responses to this entry through the RSS 2.0 feed. You can leave a response, or trackback from your own site.